The Broccoli is growing in Leaps and Bounds!


Posted by Seedsower Farm, LLC at 2:14 PM No comments:

The long wait to get to part II of this study is over!  The Broccoli starts that I seeded on July 4 (5-72 cell trays, or ) have sized up nicely and the forecast for a clear/dry few days allowed me to get all 320 starts into the ground.  Single row planting at 18" Spacing made this task a bit easier, but it was still a two day job that took a good amount of time.


Now the Broccoli plants are in, I will still need to keep the rows and beds clear of weeds, but the easy part of simply waiting and watching the broccoli grow is a joy to behold.  I will be re-staking the field so that I can make observations about the growth habits of the plants and compare them based on the treatment area they have been planted in.

My study doesn't actually call for additional mulch, but I will be weighing the harvest of the heads once they mature.  Since the variety I chose was Marathon F1, which is supposed to be very tolerant of cold weather conditions.  A calabrese type, this variety will produce a medium sized head and then continue with side shoots (weather permitting).


Posted by Seedsower Farm, LLC at 6:00 PM No comments:

I have finally arrived at the most difficult part of the study: harvesting and the final weeding.

Due to other responsibilities, this part of the study required me to weed and harvest over the course of three weeks.  When it was all over I was glad. 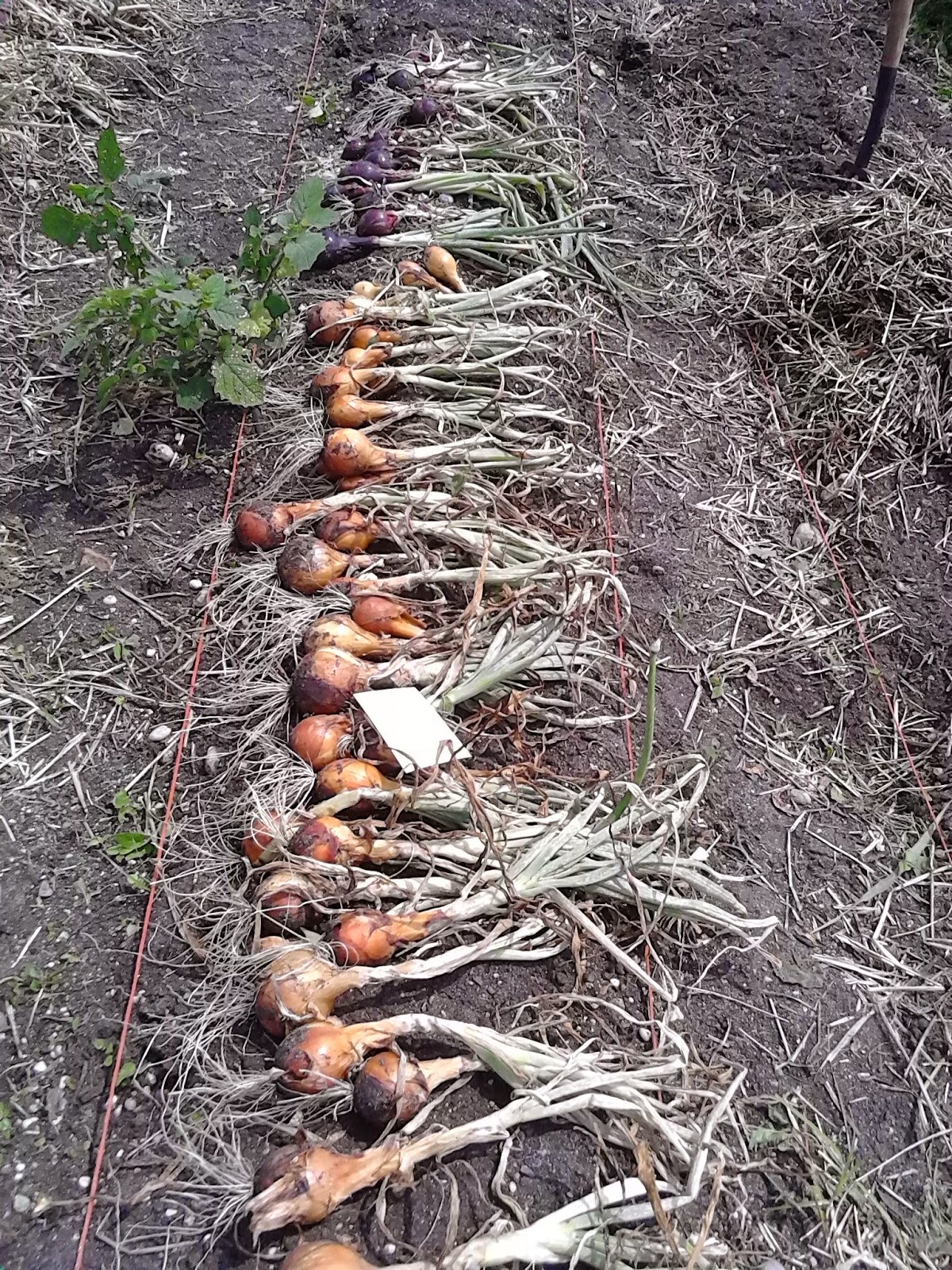 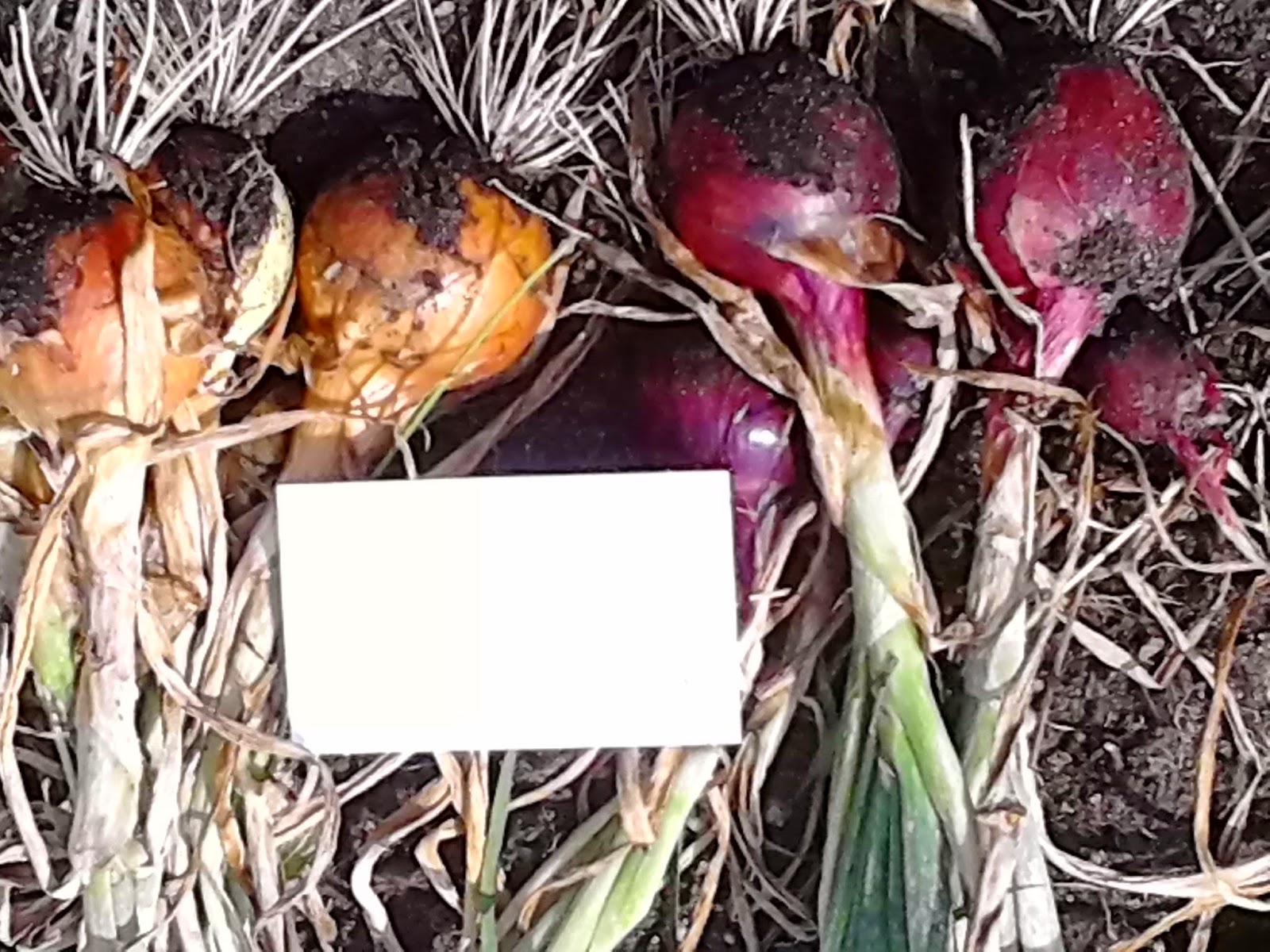 My data, which has yet to be analyzed in accordance with the different treatments yielded the following:

UnWeeded sections (Remember, this were the sections not weeded all summer):
Weeded Sections (Weeded once during the summer)
Of the 960 Red Zeppelin and 960 Patterson Onions, here are the following yields:


Note the significant difference in the Red Zeppelin and Patterson yields...this, unfortunately was a pure and simple case of poaching. As I harvested the red onions, I clearly saw the depression in the soil of where a big fat onion once was anchored.  (The land I used is leased to other individuals, some of which thought my onion patch was part of a u-pick operation.)  I don't know how this will affect my study at this point, but I am hopeful that there is enough data for the three rows that were not so affected in this way.

Posted by Seedsower Farm, LLC at 5:35 PM No comments:

Off with their Heads!

As the season progressed, the weeds in the unweeded sections of the study started to loom over me.  The weeds were well over 5 feet tall and ready to seed.

As a favor to the farmer who lent me the spot and also to minimize shading of the onions in adjacent rows, I decided to take matters into my own hands and to "top" the most egregious of weeds in the sections that were not weeded...this was no small feat, as some of the weeds (especially the pigweed and lambsquarters) had formed lignified stems of at least 1/2 inch in diameter and the process took over 4 hours for all four rows, and over 230 lbs of tops, alone!


Posted by Seedsower Farm, LLC at 7:00 PM No comments:

Ask any gardener what they think of weeding and they might respond in an upbeat way with a quip like "it's like meditating." These words are seldom uttered by a farmer, or at least a market gardener who is growing organically, on VERY fertile soil.

I heartily agree that the the adage, "one years seed equals seven years of weeding" is so appropo!  And by the looks of this little plot, there was more than one year's seed in there.

The weeds on this plot of land are absolutely prolific, and I tackled it head on in two days and a little over five and one half hours, not including the two and a half hours it took me to weed the paths a few days earlier.

Of interest was the variety of weeds that grew in each treatment.  Here is an inventory by treatment:

Also significant was the difference in the color density of the weeds among the different treatment groups. Unfortunately, my camera wasn't able to really show the difference, but those weeds growing in the SBG were certainly "greener" than those in the Straw or control treatment patches.

Posted by Seedsower Farm, LLC at 5:01 PM No comments:

Now all I have to do is wait for the weeds to show up...to start the real fun of the study. 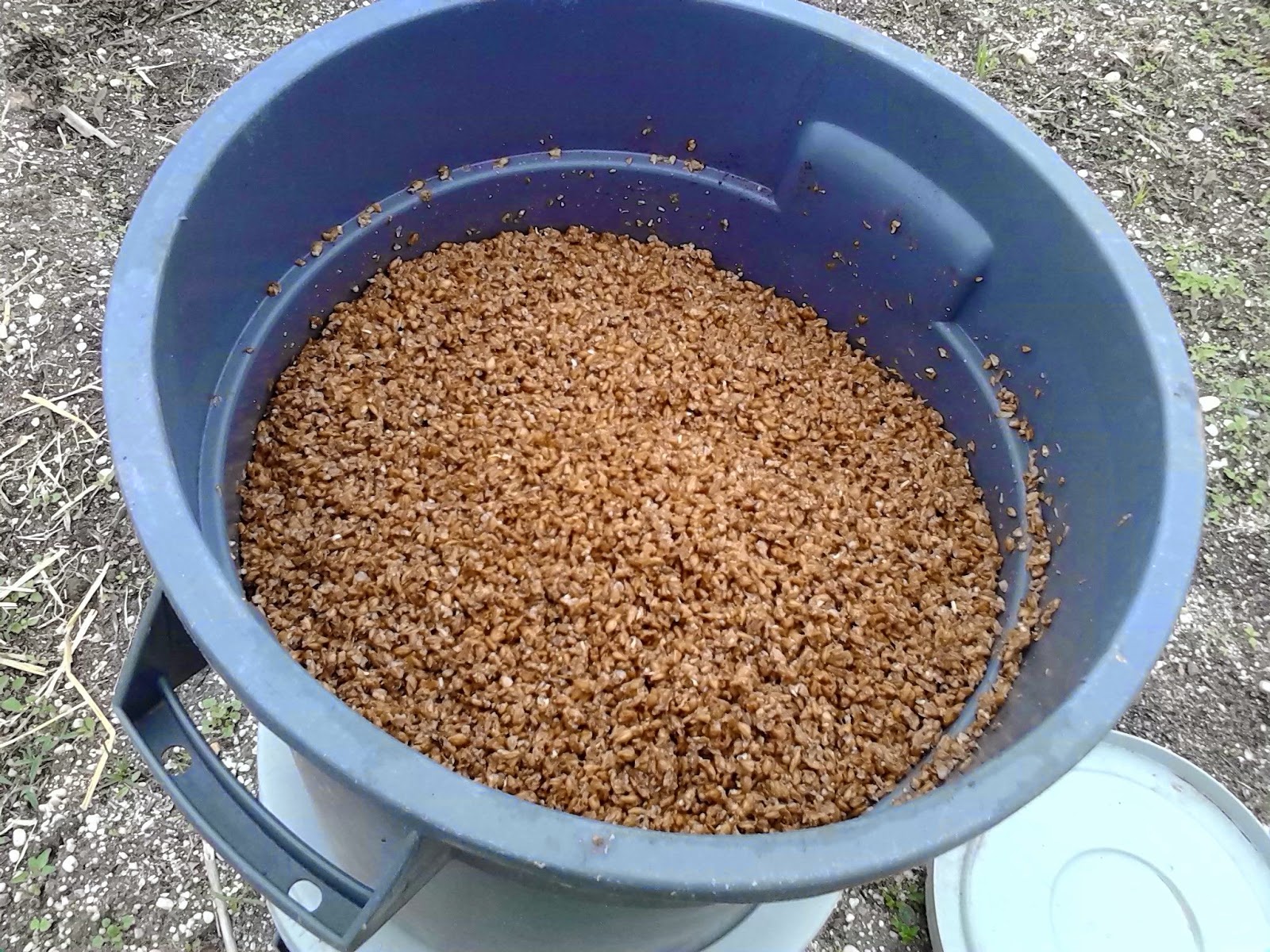 Posted by Seedsower Farm, LLC at 2:00 PM No comments:

The Flip side of Fertile Soil

Turn your back on a field for a few days, or in my case a few weeks, and the weeds can get ahead of you.

The onions have been in the ground for over a month and have (presumably) set their roots and are now ready to be mulched.  But not before I weed once to create the clean slate I want for my study.

So I spent a few hours doing that before beginning the process of mulching. 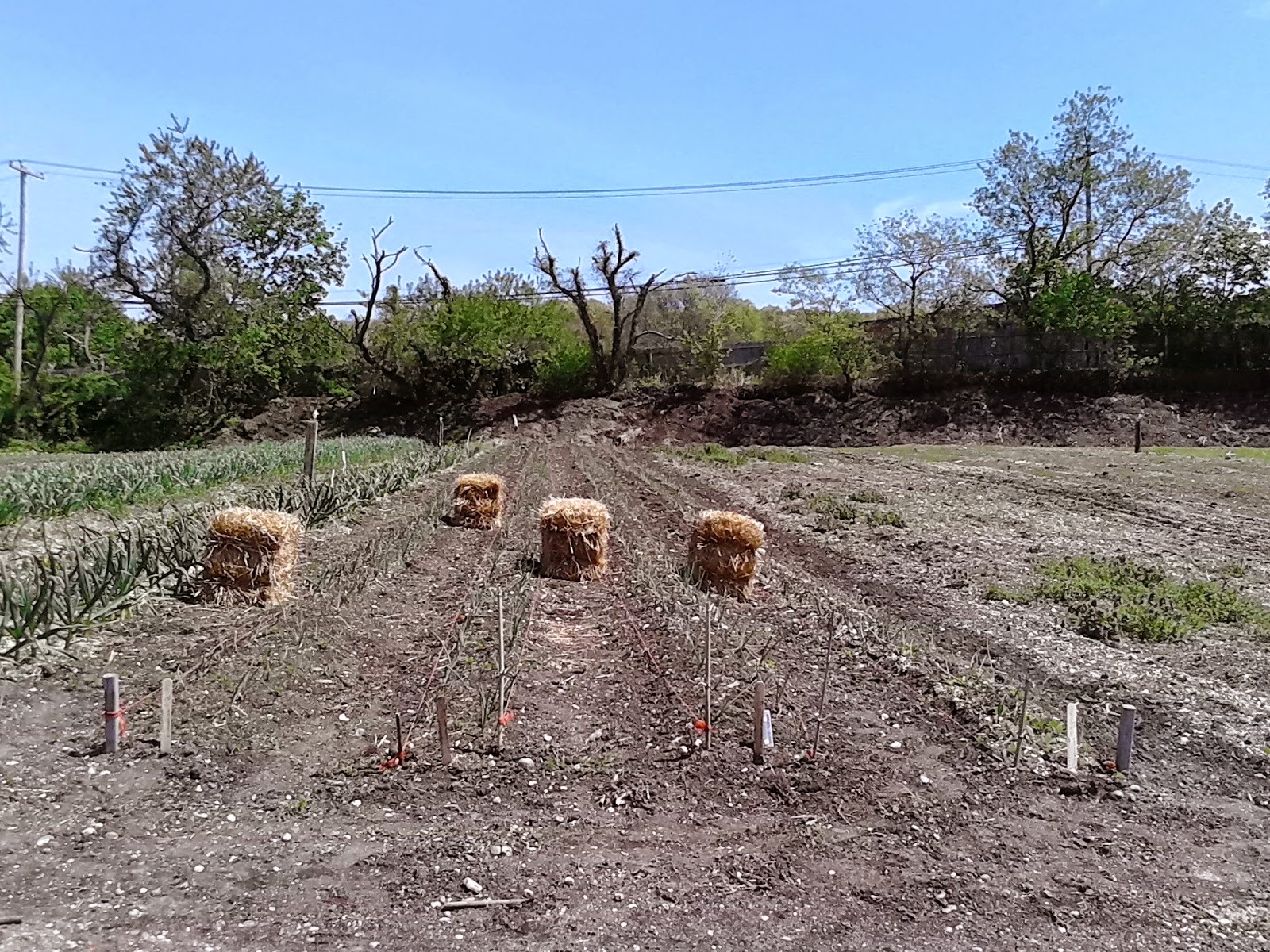 Straw mulch was put down a few days ago on the areas designated for that, and because the space is much smaller than I originally planned for, I used only three full sized square bales for the entire area needing straw as compared to the 10 I thought I'd need.  This resulted in a mulch depth of about 1 inch.

Straw mulching is great, but it does takes time and money, too.  The hope of every would-be mulcher is that the time and money put in now will pay off in spades later.

Then the less glamorous mulch, the Spent Brewer's Grain (SBG) went down today.  SBG has on the plus side of the equation that it is:
On the other hand, it is:
A total if 165 lbs of dry grain will result in 297 lbs of wet grain. (That calculation is based on a homebrewer stating that 10 lbs of grain will absorb 1 gallon of water, which weights approximately 8 lbs.).

Though it seems like a lot of grain, it only actually covered two of the four treatment replications (Row 1 + 4) to a depth of 1".  Luckily the brewer I am working with will be brewing again next week, so more will be available then.

Posted by Seedsower Farm, LLC at 5:00 PM No comments: